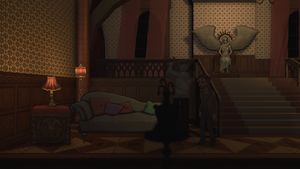 In the drawer on the left side 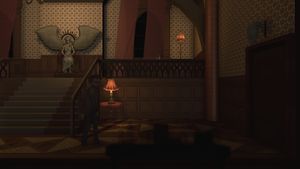 Used on the door to the right

The Doorknob is an item in Immure.

It is found in a drawer of an end table to the left of the stairs where the player first gains control of Will. The drawer has a design of what appears to be a minotaur on the front. It can be found again in the same location after Will awakens in a trashed version of the Parlor.

The doorknob belongs to the door on the right that leads to the Hall to Grace. Reattaching it allows Will to use the door.

It will later need to be used again on the same door, though this time it leads to the West Hallway.